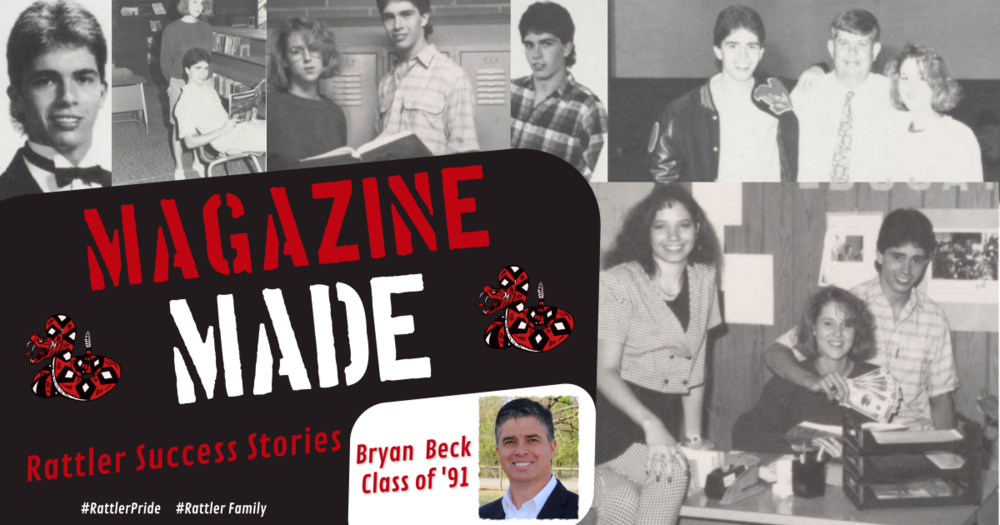 MAGAZINE – It’s been more than 30 years since Bryan Beck walked the halls of Magazine High School, but the 1991 graduate still readily recalls fond memories of his time as a Rattler and how growing up in a small community and small school helped him become successful in life.

“Attending a small school makes it impossible to be ‘just another number.’ The teachers know the students, making it easier to be invested in student success,” said Beck, who currently lives in Tulsa, Okla, with his wife, Katy, and their children, Lex and Reagan.

Beck, who is now a successful industrial engineer in the Tulsa metro area, was part of a graduating class of 27 students and was one of eight honor graduates. His classmates voted him “Teacher’s Pet”, “Most Likely to Succeed”, “Most Studious” and “Most Intellectual”.

Beck, who attended Magazine Schools from kindergarten-12th grade, also was a member of several student organizations and participated in many extracurricular activities. He was a member of Beta Club and quiz bowl and was vice president of the Spanish Club.

His favorite class, activity or sport?

“Basketball,” said Beck, who also ran track. “I loved being part of the team and enjoyed the game, although I was, admittedly, not very good.”

Magazine High School science teacher and coach Randy Bryan, who was Beck’s basketball coach during his junior and senior years, recalls him being an exceptional student.

“I believe he is one of the top students to EVER graduate from Magazine Schools,” Bryan said. “His excellence is evidenced by his GPA, ACT score and exceptional and exemplary performance at the collegiate level, as well as in his chosen vocation.”

After graduating from Magazine High School, Beck attended the University of Arkansas, where he graduated with a bachelor’s degree in mechanical engineering in 1995. While in college, he joined the Navy and served in the submarine fleet for eight years (1994-2002).

As a submarine warfare officer, Beck was responsible for the safe operation of $2 billion in military assets by a 160-man crew with more than 20 direct and numerous indirect reports. He was a qualified ship's engineer (nuclear), an officer of the deck, ship's duty officer, strategic weapons duty officer and nuclear weapons courier and held numerous other high-responsibility positions.

He earned a master’s degree in Industrial Engineering from the University of Florida in 2002 and moved to Tulsa, where he’s been designing and selling equipment to various oil and gas-related companies for more than 20 years. It’s a career that’s taken him to more than 30 countries.

Beck said there are several aspects of the quality education he received at Magazine Schools that have helped him be successful not only in earning multiple college degrees or taking on leadership roles in the military but also in the professional world.

“The attitude in education in the 80s and early 90s was much more relaxed than it currently is,” Beck said. “The process was much more forgiving of mistakes. It provided opportunities for students to learn and experiment on their own without fear of major failure.”

Beck offers current and future Rattlers a simple but direct piece of advice when it comes to being successful in school and in life.

And, always have “Rattler Pride”.

“For me, ‘Rattler Pride’ is about remembering your roots and recognizing the quality and warmth of the people in Magazine,” Beck said.

NOTE: This is the first installment of the “Magazine Made” series of feature stories chronicling the lives of successful Magazine High School alumni that will appear periodically throughout the year.